The State Of The Nation: What EPF’s 1H income says about 5% dividend for 2022

A significantly lower income haul from equities and foreign investments from April to June this year resulted in the Employees Provident Fund (EPF) reporting its lowest quarterly gross investment income in 14 quarters in the second quarter (2Q2022) — vastly diminishing the chances of it beating its 2021 dividend of 6.1% (conventional) this year.

At the current juncture, it is more likely for dividends to fall within the 4%-5% range for 2022, our back-of-the-envelope calculations show. If 2H2022 performance mirrors 2Q2022, however, dividends could slip just below 4% for the first time in more than six decades.

While the EPF dividend (conventional) last fell below 5% 14 years ago in 2008, when it declared a dividend of 4.5%, the amount that the EPF needs to deliver every 1% of dividend has easily tripled from a mere RM3.2 billion in 2008 during the global financial crisis (see Chart 1).

Put another way, the entire RM14.3 billion distributed as dividends in 2008 would have been enough to deliver only a 1.5% dividend today — something that also needs to be seen in perspective, given that the EPF’s total fund size was only around RM350 billion in 2008, about a third of what it is today.

If history is any indication, numbers between 1Q2017 and 2Q2022 show that gross investment income had fallen below RM10 billion only once in 1Q2019. 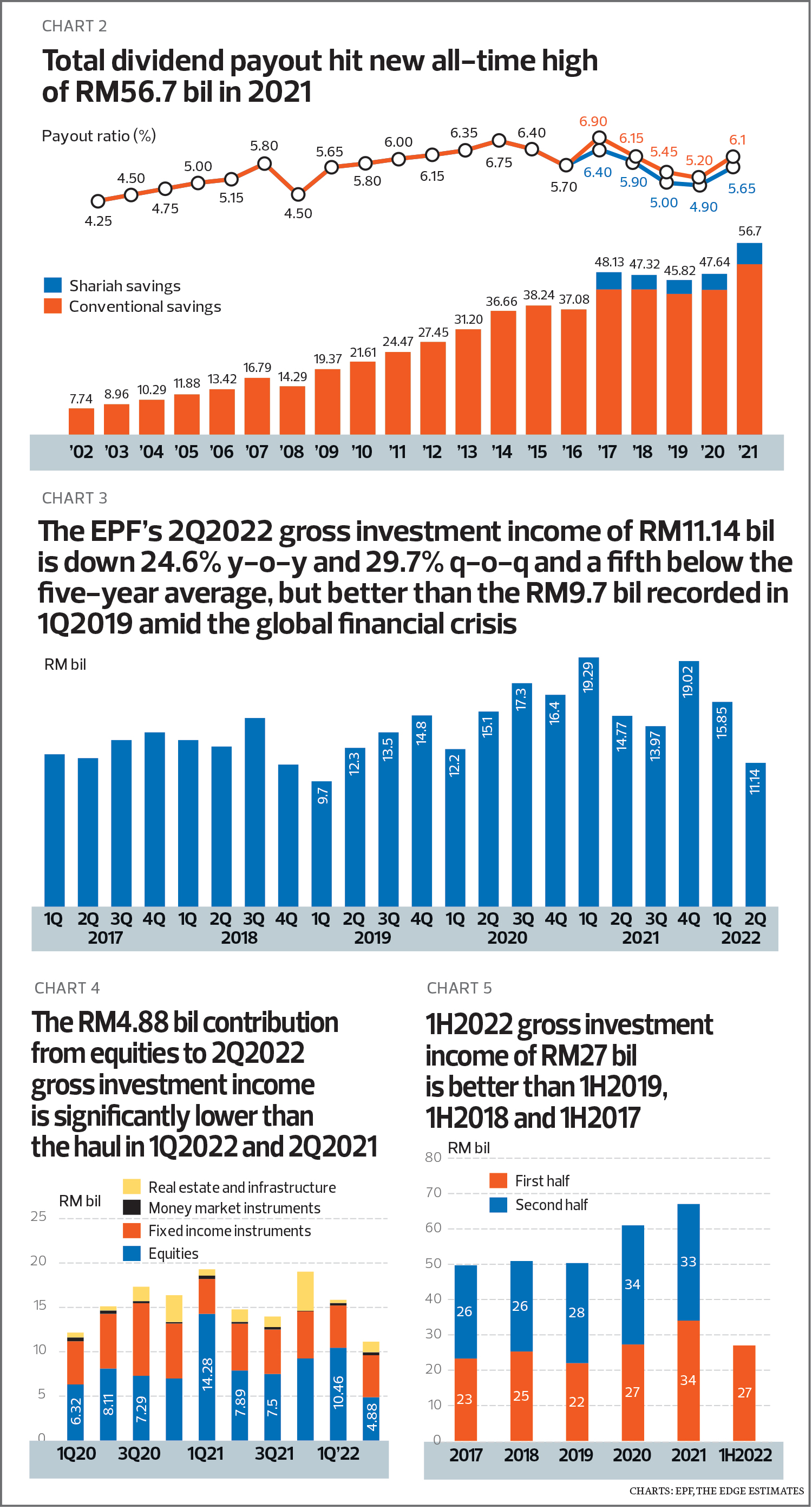 That said, it is tough for any fund this year to outperform what it usually delivers, given the heightened market volatility after Russia’s Feb 24 attack on Ukraine bumped up food and commodity prices. To curb runaway inflation, the US Federal Reserve had hiked the federal funds rate by three full percentage points (300 basis points) between mid-March and Sept 21 to bring its rates to between 3% and 3.25%. With core inflation in the US hitting a 40-year high of 6.6% year on year in September, the Fed is widely seen to raise rates by another 75bps come Nov 2 and may continue to do so at its last scheduled meeting this year on Dec 14 to push rates above 4%. This has caused funds to pull hundreds of billions of dollars from emerging markets.

In a statement dated Oct 7, EPF CEO Datuk Seri Amir Hamzah Azizan said: “Expectations of global growth have suffered, which caused a persistent sell-off in the global markets. The consistent downward trend impacted EPF’s equity earnings, especially through global stock markets, which declined between 17% and 21% during 1H2022. Nonetheless, the EPF’s diversification into different asset classes, markets and currencies, as prescribed in its Strategic Asset Allocation, has helped the EPF to remain resilient against turbulent market conditions and to protect its long-term investment returns.”

Some reckon that the EPF may have locked in profits early this year, ahead of the ongoing global market rout across asset classes such as equities, fixed income and currencies. Only the EPF knows whether it had to carry out premature selling to prepare for what it hopes to be the last Covid-19 pandemic-related withdrawals, which totalled RM44.6 billion in 1H2022, slightly more than the RM43.23 billion in (gross) contributions received in the same period.

Last year, pandemic-related withdrawals totalling RM86.2 billion raised total (gross) withdrawals to RM131 billion, causing the EPF to record its first net withdrawal, or negative net contribution, in 20 years of RM58.2 billion, with gross contributions at only RM73.89 billion, according to the fund’s 2021 annual report released in late September after being tabled in parliament.

When announcing 2021 dividends in early March, the EPF said RM22 billion was repatriated to meet outsized pandemic-related withdrawals last year and that it also had to miss out on some local investment opportunities.

The EPF could still see a small net withdrawal this year, if usual withdrawals in 2H2022 also exceed contributions, but the quantum will not be as big as 2021, when it collected RM6.07 billion a month in (gross) contributions, on average.

The significance of overseas investments is that these assets have contributed significantly to the EPF’s annual income in recent years.

In 2019, foreign assets were only 30.3% (roughly RM280 billion) of total assets but contributed 41% of gross investment income. Return on investment (ROI) for overseas assets was 7.78% compared with 4.9% for domestic investments.

For 2021, the EPF said 37% of its total assets (roughly RM373 billion) are foreign. It also said foreign listed equities saw 10.44% ROI, above the 8.96% ROI recorded for the overall equities asset class, which contributed 58% of total gross income.

It is uncertain how much of the increase in asset base year on year was due to foreign exchange translation gains, given that EPF assets were located in more than 40 countries and 28 currencies, according to its 2019 and 2020 annual reports.

In its 2021 annual report, the EPF said the ringgit’s movements against other currencies, especially the US dollar, had resulted in a RM1.36 billion net gain on foreign exchange, or 3% of gross investment income.

In any case, there seemed to be a decline in overseas assets in 2Q2022, though contributions from foreign assets to gross investment income remain sizeable.

Overseas assets, which the EPF says made up 36% of total assets as at end-June 2022, likely declined to just below RM345 billion, our back-of-the-envelope calculations show.

“As at June 2022, the EPF’s assets under management were RM957.25 billion, taking into account the pandemic-related withdrawals amounting to RM44.6 billion,” the EPF said in a statement when releasing 2Q2022 numbers, emailed to the media amid the tabling of Budget 2023 on the evening of Oct 7, the last working weekday before the 14th parliament was dissolved on Oct 10. The EPF usually releases 2Q numbers as early as late August or by the third week of September at the latest, going by its practice in the past decade.

Whether the dividend for 2022 will be closer to 4% or 5% should be clearer when the EPF releases its 3Q numbers. This usually happens between late November and mid-December but, for 2021, 3Q results were released only on Jan 11 and the dividend announcement made on March 2 (instead of mid-February).

It will no doubt be tougher for the EPF to continue to generate annual dividends of more than 5%. While its track record shows annual dividend has not fallen below 4% since 1959, and that it had fallen below 5% in only four out of 22 years since the turn of the millennium (the lowest being 4.25% in 2002; 4.5% in 2003 and 2008; and 4.75% in 2004), past performance does not guarantee future performance. The EPF would probably say its SAA is reviewed to ensure sustainable performance. By law, the EPF only needs to deliver at least 2.5% nominal dividend annually and ensure that real (inflation-adjusted) dividend is at least 2% above inflation on a rolling three-year basis.

Whether or not the government goes ahead with raising the ceiling for EPF voluntary contribution to RM100,000 a year, from RM60,000 a year, from Jan 1, 2023, as proposed under Budget 2023, salaried members can already voluntarily contribute up to 100% of their wage (instead of just the statutory rate of 11%) through salary deduction. Those who have done so have received good government-guaranteed gains in their retirement kitty in the past two decades.

Those who believe the EPF will continue to deliver at least 4% dividend for years to come would know how they compare with fixed deposit rates, which have inched higher in recent months.

According to data from Bank Negara Malaysia, 12-month fixed deposit rates at commercial banks had, on average, risen 49bps to 2.2% as at July and August, from 1.71% in April. A quick check showed several banks offering 2.5% to 2.6% for 12-month fixed deposit, a level that should be closer to 3% by mid-2023, going by current expectations on the overnight policy rate (OPR), which is up 75bps after three 25bps hikes in May, July and September to reach 2.5% currently. Bank Negara’s monetary policy committee has one last scheduled meeting for the year on Nov 3 and is likely to meet again by the third week of January. Expectations are for another 50bps hike to 3% by mid-2023.

In its statement, the EPF said it remained cautious of risks — from soaring global inflation and geopolitics to aggressive tightening of monetary policy — that continue to rattle markets and investor sentiment.

“Markets are still very volatile, and while we are deeply concerned by these developments, we maintain our long-term and balanced approach in our investment decisions, as there are pockets of opportunities that we can capitalise on during these challenging times,” EPF’s Amir said.

“As a retirement fund, the EPF’s overarching strategy focuses on long-term sustainability of our investments and returns. We will take all necessary measures to ensure our financials remain strong and resilient to be able to withstand any volatility risks and short-term challenges.”