Ferrari has released its new 296 GT3 Racer, a fierce looking machine that will carry the Italian manufacturer into its 2023 GT racing campaign and beyond.

The successor of the wildly victorious 488 GT3, and based on last year’s road model, the mid-rear-engined 296 GTB sports vehicle.

The official race christening of the new GT3 will come at Daytona in 2023, along with the new Porsche and McLaren GT’s which were recently released.

The new 296 GT3 marks the return to the track of the six cylinder engined Ferrari, and in compliance with technical regulations, it is without the electric unit that is featured in its road GTB model.

The engine features a 120 degree vee configuration with equally spaced firings introduced for the 296’s GT3 V6 combustion engine. This is based on its road going twin, as is the positioning of the turbos within the vee. This means a more compactness and a lower center of gravity and reduced mass, helping it to achieve very high levels of power.

The architecture of the engine is a pure winner, in terms of firing order, integration of the intake manifolds and engine mounts on the intake sides of the cylinder heads. The engine is lighter and more compact having eliminated the external plenums and supports. Its internal fluid dynamics benefit from the reduction in volume, boosting intake efficiency.

The powertrain has been tweaked to reduce fuel consumption as much as possible without sacrificing performance: one such measure being the alternator, which is attached to the gearbox for an improved compactness.

The engine is mated to a new transmission developed especially for this race car, and the gearbox incorporates a single-disc clutch design with six gears with electronic clutch actuation. Steering-wheel-mounted paddle shifters provide an all new gear-shifting method, in comparison to the 296 GTB predecessor.

All up this new V6 engine design gives a maximum of 600 horsepower with a maximum torque of 712Nm’s.

A significant amount of the development work has also been invested into the 296 GT3’s aerodynamics. In line with FIA regulations, the body kit gives the racer %20 more downforce compared to Ferrari’s previous generation of GT3.

Its lightness of frame also helps the car exploit its grip potential without sacrificing its tire life, meaning that this new chassis, which draws influence from the 488 GT3, goes beyond in its new design, and gives 296 GT3 a repeatability that will suit certain tracks well, and keep pushing Ferrari into the winning circle. 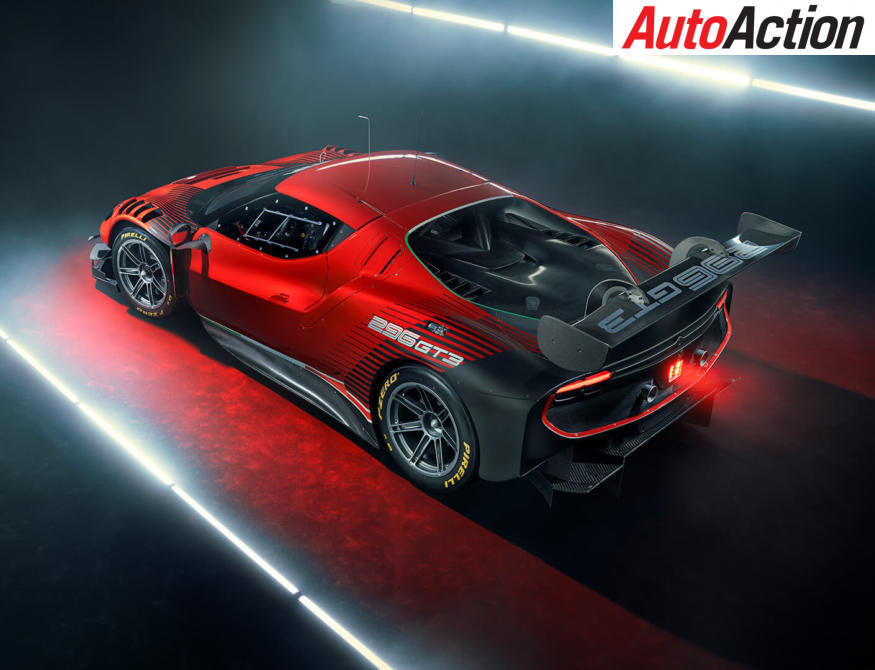 In terms of the driver’s space, the cockpit provides incredible visibility and an improved sense of feel for a more naturally intuitive drive, and the interior has been designed based on input from factory pilots and customers from the competitive motorsport arena.

The concept for this project first emerged back in 2020 at Ferrari’s R&D center, and it is now in its final stages of testing, and has already completed tens of thousands of miles in rigorous evaluations.

The Daytona of 2023 could be the start/continuation of something special for Ferrari’s new racer. It’s got some big shoes to fill in replacing the reliable winning efficiency of the 488 GT3, but with the Prancing Horse’s great eye for innovation and pursuit of perfection, the 296 GT3 shouldn’t have any trouble in doing so.

Get the latest updates delivered directly to your inbox