Stampin opponents get heated up over fire incident at Maong Bazaar 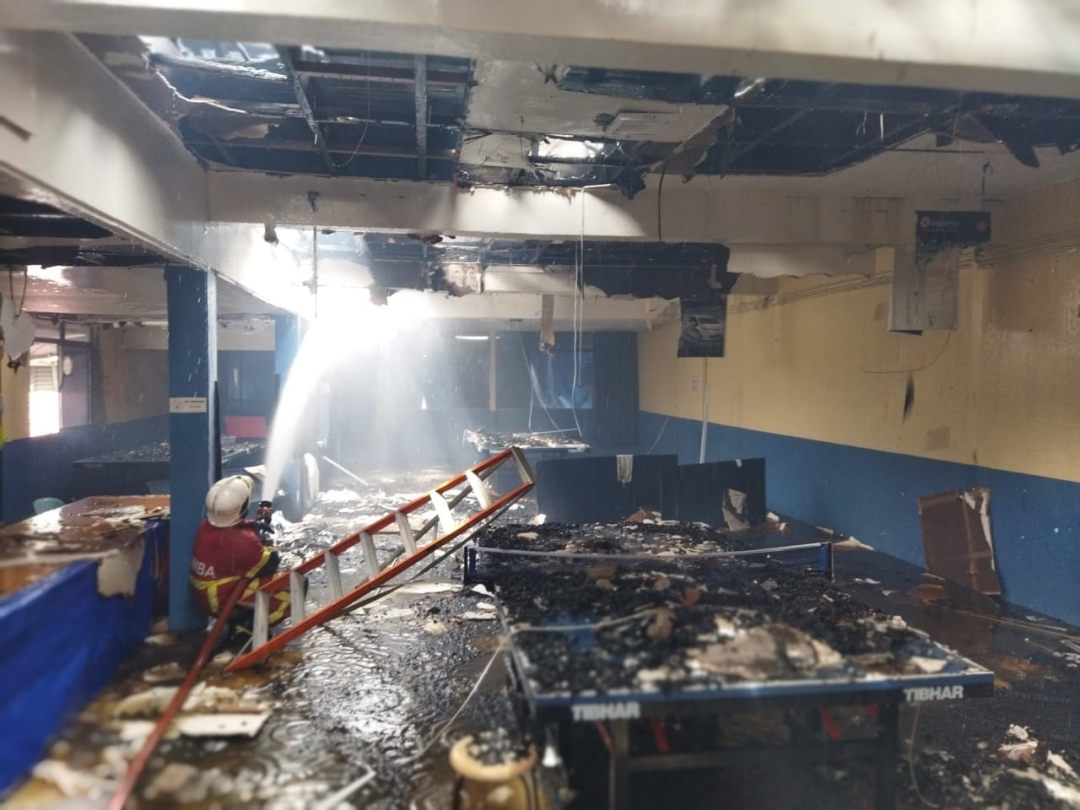 Bomba photo shows a firefighter putting out the fire on the second floor of the premises.

KUCHING (Nov 9): Tempers flared in the race for Stampin today as two candidates locked horns over a fire incident at 3rd Mile Maong Bazaar and issues with water supply.

In a video interview, Stampin incumbent Chong Chieng Jen was seen at the scene agitated over what he deemed as nonchalant reaction from his opponent, Padawan Municipal Council (MPP) chairman Lo Khere Chiang, at the scene of the fire.

“The firefighters were extinguishing the fire halfway when there was no water. I asked the people around here what the actual situation was, and they said the Bomba (Fire and Rescue Department) couldn’t find a hydrant nearby so they had to bring in a water tanker.

“Actually, the fire was almost put out but because of the interruption, it started again,” he told reporters at the scene.

Chong said when he first arrived, he saw Lo walking around with his phone, as if he was doing live updates.

“I kept looking at him and I could not stand it anymore, so I went over to him and said to him, ‘YB, you’re MPP chairman and also an elected representative with the government and there are a lot of manpower you can mobilise to help, please lah, do something, get more people to come over to help’.

“But he told me this didn’t concern him as the firefighters were already here, and then he said that I’m also an elected representative, I should do something. We are talking about firefighting here, we are here to solve the problem but he’s here to do live (updates),” he lamented.

In a separate interview, Lo said he was disappointed that Chong had come to the scene and talked about him not doing his job as MPP chairman and claimed that there was no water.

“How is it there was no water? You can see the Bomba had already contained the fire. The damage is only to the upper floor of one shoplot, the fire did not spread to the entire row of shoplots.

“Chong, who is a three-term assemblyman, came to blame me for this. Why didn’t he go and get Bomba to check on the hydrants? Every day I have done a lot and I have the report card to show. Anyway, Bomba had already checked on the hydrants in this area. It is baseless to claim there was no water,” he said.

Meanwhile, when met by reporters at the scene, Batu Lintang fire station chief Mohamad Raffy Saibi said there was no problem with water supply.

He said the water tanker was just Plan B in case there was any problem with the water supply.

“Having a water tanker doesn’t mean there’s any issue with water. It’s just a backup.

“Even though there was a brief interruption, we managed to get the water going. The water pressure was strong too. The fire was under control already and didn’t spread,” he said.

Mohamad Raffy also said there was no problem with the hydrants as they found one across the road.

He also said that it is a routine for them to check all hydrants at least once a year.

In the incident which happened around noon, a 19-year-old man suffered 30 per cent burns to his back.

Bomba in a statement said the third floor of the premises, which is a shoplot apartment measuring about 167 square metres, was completely destroyed.

The second floor of the shoplot, which is a snooker centre, was 50 per cent damaged by the fire while the coffeeshop on the ground floor remained intact.

Renting the shoplot apartment together with the victim were four men and a woman.

The victim, who works in the area, was brought to the Sarawak General Hospital for treatment by Bomba’s Emergency Medical Rescue Services.

Family cast out after a squabble