Arsenal will turn their focus to the Premier League on Sunday when they entertain Nottingham Forest at the Emirates Stadium.

Mikel Arteta’s side face a relatively quick turnaround after suffering a 2-0 defeat away at PSV Eindhoven on Thursday night in the Europa League. They will be aiming to bounce back to winning ways having been dethroned by Manchester City after the Sky Blues beat Leicester City on Saturday.

Nottingham Forest, who pulled off a 1-0 upset against Liverpool, will be looking to inflict further damage on another one of the Premier League’s big boys.

Arsenal will assess forward Marquinhos, who has been ill, and defender Gabriel Magalhaes, who limped off during Thursday’s Europa League defeat to PSV Eindhoven.

Matt Turner (groin) missed the European fixture in midweek and remains doubtful along with Oleksandr Zinchenko, who has been nursing a calf problem for some time now. Meanwhile, Emile Smith Rowe (groin) and Mohamed Elneny (hamstring) remain sidelined for the Gunners.

If Gabriel Magalhaes fails to attain fitness, Mikel Arteta may pair Ben White with William Saliba in central defence in the Arsenal lineup.

White being pulled in at centre-back should open the door for Takehiro Tomiyasu to start at right-back, which is his natural position.

With Oleksandr Zinchenko still out with a calf problem, Kieran Tierney is expected to get the nod at left-back in the Arsenal lineup against Forest.

Grant Xhaka remains irreplaceable in the centre of the park, thanks to his superb form this season. He has been a consistent performer, adding goals to his game.

The Swiss star will form the double pivot in the Arsenal lineup with Thomas Partey, as the Gunners look to dominate Forest in midfield at the Emirates Stadium. 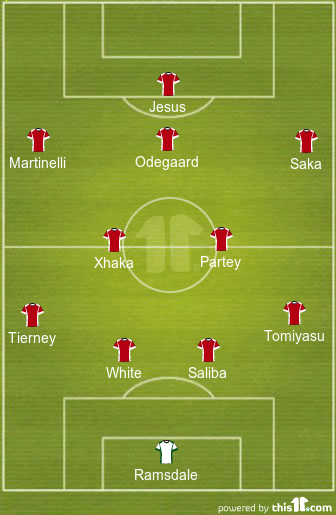 Martin Odegaard, the Arsenal skipper, is expected to be deployed once again in the No.10 role in the Arsenal lineup. The Norwegian’s movement, incisive passing and vision will be pivotal in breaching the Forest backline.

The likes of Gabriel Martinelli and Bukayo Saka should occupy the wide attacking spots for the hosts. Both Martinelli and Saka are exhibiting their skills consistently in the final third, thus, making them key components of Arsenal’s attacking play.

Gabriel Jesus will once again get the nod ahead of Eddie Nketiah to spearhead the Gunners’ attack, even though he hasn’t been able to find the back of the net in the last three league games.

The likes of Nketiah, Fabio Vieira and Albert Sambi Lokonga may get involved off the bench at some point against Steve Cooper’s side.

NFA over Gnanaraja’s case | The Star