We can finally travel again! We would love to hear about your travels and adventures. If you don’t feel like travelling yet, that’s OK, as you can always tell us about your past holidays instead.

Your story – experiences, tips, advice – should be 700 to 800 words long in Word or Text format. Please attach some photos (1MB, captioned) in a separate email. There is no payment for submissions, and we reserve the right to edit all submissions. Email [email protected] with the subject “Readers Share”.

Margret, my wife’s dear friend, recently invited us to visit her in South Tyrol in northern Italy. South Tyrol was part of Austria until after World War I, when it became part of Italy. Because of its Austrian and Tyrolean roots, German is widely spoken there, and the community’s culture mirrors that of its origins.

South Tyrol is a mountainous region with three interconnecting valleys, and the river – Adige – flows through the valleys. The Dolomites are its most famous mountains.

This also happens to be apple and wine country. Apples grow on the plains while grapes grow on the lower slopes of the mountains. Higher up are the meadows and pastures of alpine dairy farms.

We took a train from Innsbruck in Austria to Merano in Italy. The train goes through the Brenner Pass, hugging the sides of the mountains, giving us picturesque views of alpine meadows and valleys, quaint villages and spectacular engineering marvels of long-spanning bridges over deep gorges.

We could smell a heady scent of jasmine wafting around in Merano … we first noticed it at the station and then around parts of the town. This plant grows lush and plentiful here.

There is a Mediterranean atmosphere about Merano. Do not be surprised to see thriving palm trees along its famed river walk where the spas are. Merano’s spa scene became prominent after visits by the then Austrian Empress Sissi.

The old part of the town with its narrow cobbled stone streets are lined with cafes, restaurants ,and shops. Medieval churches and restored buildings are worth visiting too.

There is also the Trauttmans-dorff Castle Gardens, a massive garden of art, culture and nature that was once named the most beautiful garden in Italy. 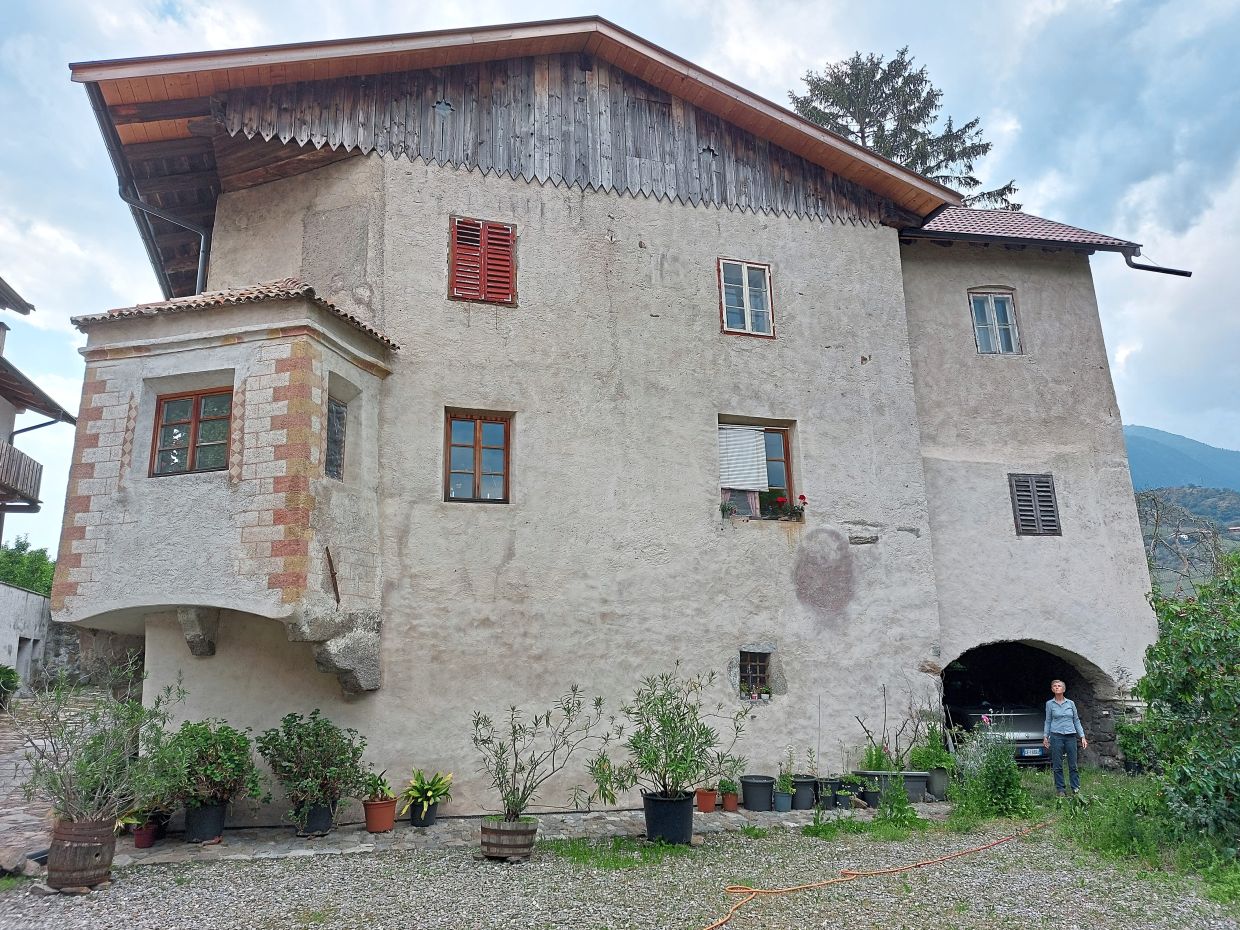 The writer’s wife standing outside Margret’s gigantic house, which used to be a courthouse.

Margret’s home is a 400-year-old courthouse in Naturns, about 15km from Merano, and is set among apple orchards. Her nearest “neighbour” is an apartment building which actually used to be a prison!

Our host has a beautiful garden with four cherry trees that was laden with fruit when we visited. My wife was very happy to see – and eat – the cherries.

South Tyrol is a nice touristy destination, especially for folks who like hiking and cycling in the summer. You can cycle along the whole stretch of the three valleys, go village hopping, or simply meander in the apple orchards.

During winter, skiing is a major attraction here, as well as other winter sports.

There are lots of castle and church ruins to check out too. Some have been restored or preserved, while others have been left in ruins.

After a few days, the mountains beckoned us. We went to Messner Mountain Museen Juval (MMM Juval), which is located at an altitude of around 900m. It is one of the six mountain museums built by former extreme mountaineer Reinhold Messner. The museums carry different mountain-themed exhibits and can be found all around South Tyrol.

We took the more challenging route to get to MMM Juval, where we hiked for two hours through vineyards and semi-arid rocky terrain. For non-hikers, you can either drive or take a shuttle bus up a narrow windy road.

Poking out of the rocky surfaces are semi-arid plants with vivid and beautiful flowers which my wife took countless photos of. There were also many local skinks sunning themselves on the rocks.

Higher up, we saw the heartbreaking result of climate change, which Margret had earlier told us about. Fine plastic netting covered some apple orchards, forming a patchwork quilt of green tops and plastic sheen. The netting is placed to protect the trees from ever frequent and heavy hailstorms. 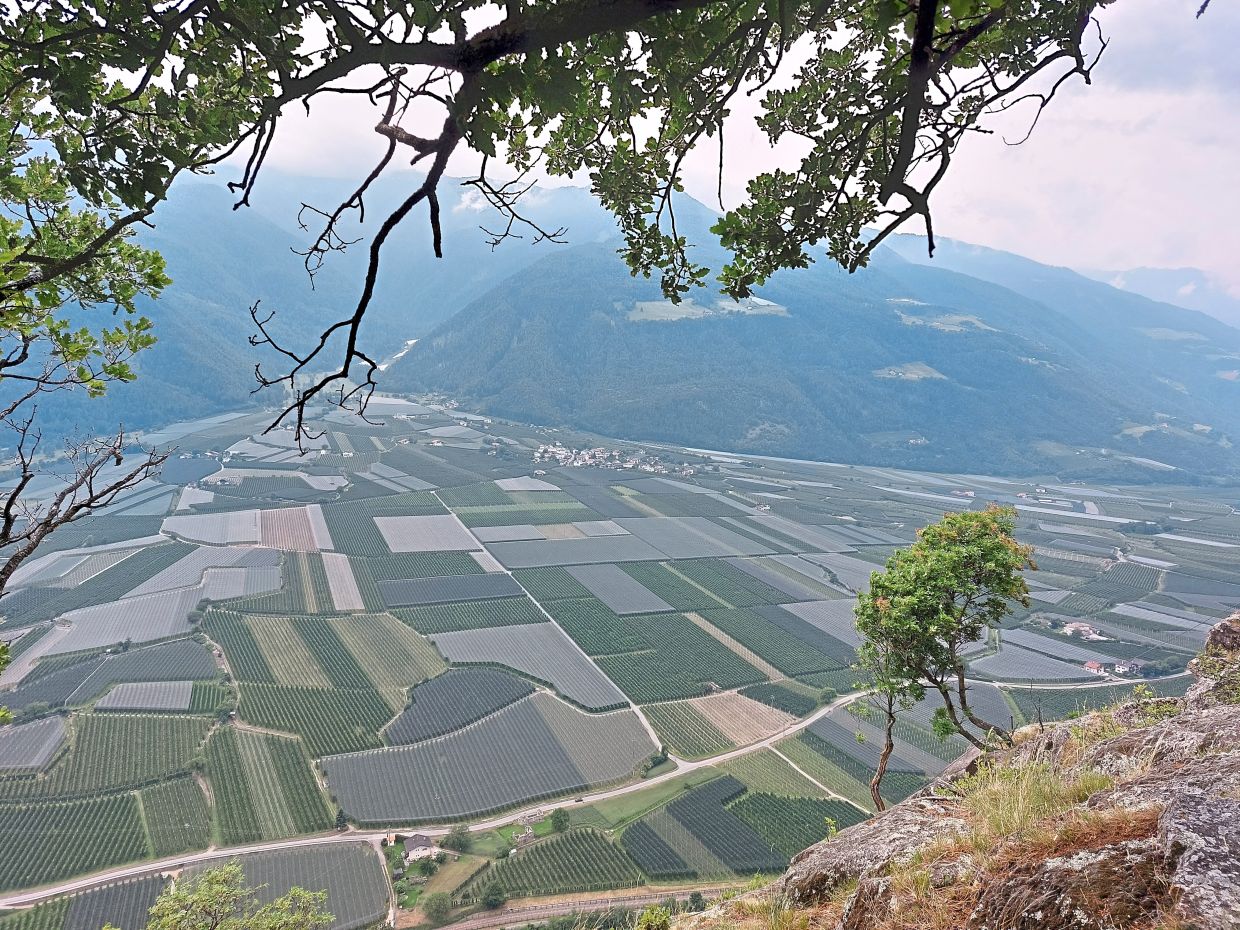 Apple orchards in the valley covered in mesh netting.

Margret said that insurance companies are refusing to insure the orchards these days, forcing farmers to put up the nets to protect their fruits.

At MMM Juval, we checked out the “Myth of the Mountain” exhibit, which is a huge collection of masks and artefacts relating to religious aspects of the mountains. There are also displays of mountaineering equipment which Messner used for his legendary climbs.

The trails led to higher terrains of green alpine meadows. Because of the warmer weather in South Tyriol, you can find water sprinklers in the meadows to keep the plants from drying, which is an unusual sight in alpine mountains if you think about it.

The next day, we did a loop on the local cable car – basically we went to the station located at an altitude of 1,300m, and then went back. The day started hot and sunny but it rained when we crossed over to the alpine woodlands and meadows from the rocky terrains.

It is like passing through a portal to another world as the change is quite sudden!

After the cable car station, we took some photos at a popular spot which features an overhang platform of wire mesh looking down to the valley. The meadow was filled with grass and blooming spring flowers, which looked so beautiful.

Overall, it was a pretty tiring day as we walked and hiked for about seven hours. When we got back to Margret’s house, she had prepared a simple pasta dish for dinner featuring her home-grown tomatoes, and it tasted so delicious.

It was a short visit, unfortunately, but we really enjoyed our time at South Tyriol and promised Margret we would be back soon for the mountains and more cherries.

The views expressed are entirely the reader’s own.

QuickCheck: Are eggs bad for your heart?