CHERAS, Nov 18 — Pakatan Harapan’s Puchong and Bangi ceramah on the eve of polling day drew an estimated crowd of 2,000 supporters.

The event’s main agenda held in Cheras Traders Square was to endorse PH candidates Yeo Bee Yin and Syahredzan Johan, who were contesting the Puchong and Bangi Parliamentary seats respectively.

“Got goosebumps wei,” Syahredzan enthused as he looked out at the crowd from atop the stage as he began his speech.

The crowd was attentive as well, cheering and laughing at the appropriate moments.

“Our unfinished business must be finished. We must finish this by tomorrow,” Syahredzan said to enthusiastic applause.

He took his audience through a fantasy scenario that would occur tomorrow on polling day.

He said: “40 seats (to PH after results are calculated). 50 seats, we have won Ayer Hitam.

“We hope you find the LRT in Ayer Hitam!” This is when his audience laughed and jeered.

When he said “Bye-bye MCA” the Chinese-majority crowd reacted with laughter, cheering and clapping.

He continued talking the crowd through to PH winning 111 Parliamentary seats, just short of the one it needed to win a simple majority of 112 seats out of 222 in the Dewan Rakyat.

“Flash, on the ticker P102 Bangi! Breaking news: PH has retained Bangi,” he said, cheekily adding that Bangi has more than 300,000 voters hence the constituency will take longer to count its votes.

“Is this just a dream?” he asked the crowd.

“No,” the people gathered answered in reply.

The people who attended the event included families with children and many took family photos with the politicians who were present.

Upon Yeo’s arrival, the supporters formed a line to take pictures with the former minister of energy, science, technology, environment, and climate change.

When Incumbent Segambut MP Hannah Yeoh arrived to open the event, she was seen approached by supporters for autographs.

Speakers at the event included: Incumbent Damansara MP Tony Pua who will not be contesting in the 15th general elections (GE15) and DAP deputy chairman and Selangor DAP chief Gobind Singh Deo who is also the incumbent Puchong MP, though he is making way for Yeo.

PH is one of three coalitions realistically in the running to win the most seats in GE15 tomorrow. While it was expected to win as many as 94 seats in one projection, this was still short of the 112 needed for a simple majority to form the next federal government on its own. 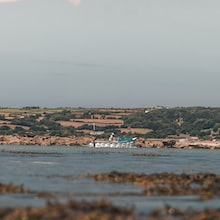