A rush to Seoul after the crush

PETALING JAYA: A distraught mother from Sabah has rushed to South Korea to see her daughter who was injured in Seoul’s deadly crowd crush last weekend.

The 64-year-old, who only wished to be known as Yolanda, said her daughter Athena Lim, 28, suffered injuries on her legs after being stuck at the narrow alley in the city’s entertainment district of Itaewon. 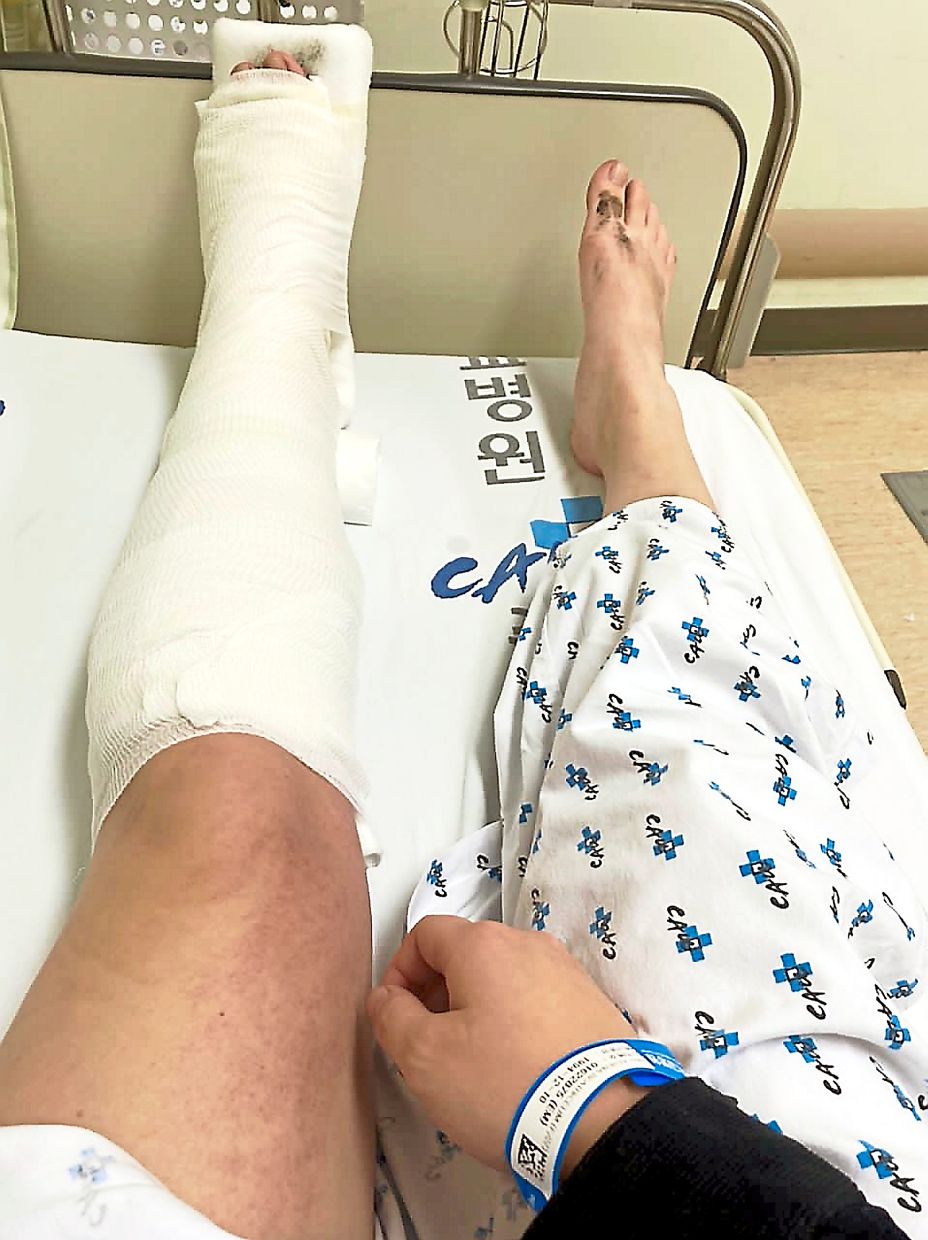 Lucky to be alive: Lim lying in a hospital bed with injuries to her leg. Lim was dragged out from under a pile of bodies by police in a narrow alleyway in Itaewon. Two of Lim’s friends were killed in the deadly incident.

Lim was sent to hospital and was unable to walk.

Yolanda, who lives in Kota Kinabalu, shared with The Star that she made several attempts to reach the Malaysian embassy in Seoul for help but failed.

She said she only got to know about the incident on Sunday morning which prompted her to try calling her daughter and the Malaysian envoy, but her efforts were in vain.

“I even asked my Singaporean friend in Korea to help contact the embassy and was only able to reach the automated answering machine.

Yolanda and her husband then decided to fly over to Seoul on Monday night to visit their daughter. However, the couple faced another obstacle when they need to apply for an electronic travel authorisation or K-ETA before entering the country.

“The approval for the K-ETA can take up to three days while we were already in the airport leaving for Korea.

“Therefore, my husband contacted Datuk Seri Masidi Manjun (Sabah politician) to request for help in expediting the issue. Masidi then reached out to the Foreign Minister to help us resolve the urgent issue,” she told The Star.

Masidi when contacted confirmed the matter saying that he had spoken to Datuk Seri Saifuddin Abdullah.

“The embassy staffers managed to contact her and her parents flew to Seoul on Monday night to see their daughter,” he said.

K-ETA is an electronic travel authorisation that visa-free foreign visitors need to obtain before entering the Republic of Korea, by submitting relevant information online such as their travel information.

As of press time, the Foreign Ministry had yet to respond to The Star’s request for comments over the matter and to verify the total number of Malaysian casualties. Earlier, BBC had reported that a 21-year-old man, named Rhau, who entered Korea from Malaysia also died in the crowd rush.

The ministry told the media that Wisma Putra was looking into the claims with help from the South Korean government.

The crowd surge in Itaewon on Saturday night was due to a huge number of people crammed in a narrow back alley on a downhill 4m by 40m path that links a busy restaurant district with the main street.

According to The Korea Herald, around 100,000 people thronged Itaewon throughout Saturday.

Malaysian envoy in Korea, however, refuted the allegations that his office did not provide proper assistance to the victim.

“Lim (victim) only suffered minor leg injuries and was treated as an outpatient at a hospital, before she was later allowed to go home.

“It is understood that Lim was hit and crushed when the victim and her friend were walking towards the subway station to go home.

“Perhaps the girl involved was at the scene of the incident because she was excited to see the Halloween party, which was also celebrated with the presence of many K-Pop artists,” he was quoted as saying by the Malay daily yesterday.

Flash floods in Penang, Perlis after heavy rain in Malaysia