Beijing’s streets are once again jammed with traffic, tourists are rushing to book foreign holidays and businesses anticipate a pick-up in activity as China’s economy reawakens from three years of coronavirus restrictions, even as the country endures its worst outbreak of the pandemic.

While China remains submerged in an unprecedented wave of coronavirus, with tens of millions infected daily, the world’s second-largest economy is starting to show signs of coming back to life following the government’s decision this month to abruptly dismantle the draconian zero-Covid system that sought to control the virus at the cost of keeping the country isolated.

Investors and analysts predict a brighter year ahead after Covid disrupted supply chains and forced stoppages on factory floors, as the economy recovers and begins to reconnect with the rest of the world. Demand for international travel is expected to surge when centralised quarantine for arrivals ends on January 8 and China allows citizens to renew expired passports.

“Pre-pandemic, China was the world’s largest source of outbound tourists, with 150mn travellers going abroad each year,” said Steve Saxon, the Shenzhen-based leader of McKinsey’s Asia travel practice. He forecast international travel by Chinese travellers would jump from 5 per cent of the 2019 level last month to about 50 per cent by the summer.

A manager at one Shanghai travel agency, who asked not to be named, said his company was already preparing. “All of us are busy talking to overseas partners so we can have an edge when the border reopens,” he said, predicting a travel “explosion” to coincide with the lunar new year in late January.

Travel booking site Trip.com said outbound bookings were up more than 250 per cent on Tuesday compared with a day earlier, when Beijing announced it was scrapping quarantine measures, while the number of overseas flight searches hit a three-year high.

Yet the prospect of an influx of tourists potentially carrying coronavirus — as well as possible future variants — has already led countries including the US, Japan, Taiwan and India to require a negative Covid test for Chinese arrivals. Italy is also testing all air travellers from China, which it said was “essential to ensure surveillance and detection of possible variants of the virus”.

In Beijing, where streets emptied out this month as millions contracted Covid in just a few weeks, life is beginning to return to normal for most residents. Yet hospitals remain overwhelmed by an influx of elderly patients, doctors have been asked to work while sick and Financial Times reporters have witnessed a sharp increase in activity at crematoriums and mortuaries.

Experts said China’s apparent strategy of letting coronavirus rip through the population had likely added to a death toll that is almost impossible to quantify. Health authorities have stopped publishing daily infections and have limited the official definition of cases and deaths. Officially, there were no coronavirus fatalities on Christmas Day and just one on Monday.

At the same time, lifting the restrictions has allowed Beijing to bounce back quickly after many of the city’s 22mn residents were infected in a two-week period. Restaurants are filling up and a traffic congestion index from Alibaba’s Gaode map showed delays on Beijing’s streets were up 50 per cent from a month earlier — although still short of pre-pandemic traffic levels, and most major cities remain emptier than usual.

Yet investors are betting that the rest of the country will not be far behind. Projections of greater demand from China have sent oil prices higher and lifted metal prices such as copper.

Consumer spending, which has been particularly vulnerable to zero-Covid lockdowns, with retail sales in November dropping 6 per cent year on year, is expected to grow. Analysts at Citi on Tuesday forecast retail sales would grow 11 per cent during 2023 to Rmb50tn ($7tn) and suggested that it was possible most major cities would pass the peak wave of infections before the middle of January.

A survey by the American Chamber of Commerce in China this month found that more than 70 per cent of respondents expected the impact of the outbreak to last no more than three months. Michael Hart, the group’s president, welcomed the reopening and said border controls were among the top issues for international business.

Hart said he expected foreign executives to start making trips to China in the coming year but cautioned that it would take longer for investment to resume. “It’s not just flipping a switch, it takes a couple of years from planning to execution,” he said.

A senior executive at a large Japanese manufacturer with facilities in the mainland said he and colleagues expected to visit soon. “China is a place where you need to keep the personal contact going,” the executive said. “There’s a lot of desire to get over there.”

Ming Liao, of Prospect Avenue Capital, said global investors were keen to get back to doing business in China. “[They] still want to invest in China but want to understand it first,” he said. “Zero-Covid policy was a major concern but now many think it will be resolved by March and are planning trips for then.”

The expected boost to China’s economy comes as the country faces a host of wider difficulties, including a rolling property sector crisis and challenges to trade, which helped buoy activity while other sectors were closed. 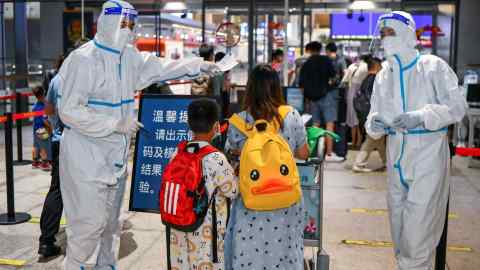 Iris Pang, chief China economist at ING, suggested that the “timing is not perfect” for China’s reopening because of the risk that a US and European recession would hit demand for goods.

Hua Yifan, a manager at Jiaxing-based clothing manufacturer Shanhui Dress, said production at his factory had been shut down because of supply shortages and sick workers.

“But I still remain confident,” he said. “If we can get through the winter, the temporary shutdown will not be a big deal.”

Reporting by Ryan McMorrow and Xinning Liu in Beijing, Thomas Hale and Sun Yu in Shanghai, Leo Lewis in Tokyo and Gloria Li in Hong Kong